If you block days in the diary they will now show as a different colour in GG, as shown:- 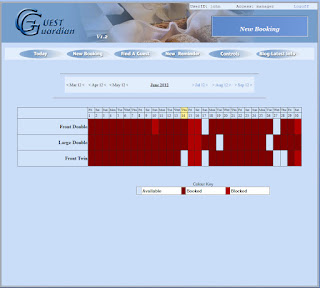 The colour used for blocked days is defined by the CACO parameter as below, the blocked colour shown above is B00000.

If CACO does not have a 3rd parameter value they will appear in black.


Blocked days in the diary are only shown in GG and not through the external interface to guests, here they will appear as booked.
Posted by Pottery House B And B at 15:16 No comments:

The monthly income report has been updated to include occupancy stats, as shown. 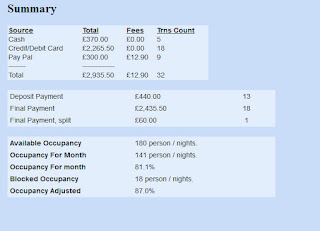 Available Occupancy is the total available beds in the month. So if you have 6 beds and 30 days in the month this figure will be 180.

Occupancy For Month is the total of person / nights in the month. So 2 people in a double room for 3 nights count as 6.

Occupancy For Month is simply the number of people / nights booked divided by the available occupancy shown as a percentage.

Blocked Occupancy  shows the number of bed / nights blocked from bookings. So if you have two doubles and 1 single room and you blocked 2 days in the month this number will show 10.