This bug has been found when cancelling a booking.

The problem occurs when a booking is created and the occupancy rate on the rooms or the price Is amended. Previously if this booking was cancelled the room rates shown in the calendar and on any subsequent bookings where incorrect.

This bug has now been fixed. Jt does mean when a booking like this has been cancelled it is not possible to reinstate the booking by completing the deposit payment. The booking has to be re-entered.

When a booking is amended an item is added to the "Requiring Your Attention" queue to remind that the booking amendment needs to be applied to the businesses paper diary.

Previously if a booking was amended multiple times, multiple reminders would be added to the queue.

Now if a reminder is already sitting in the queue additional reminders are not added.
Posted by Pottery House B And B at 00:58 No comments:

A new feature has been added to Guest Guardian to allow the business to define how far ahead bookings can be made.

The MTHS parameter has been added to the system which specifies the number of months ahead. So if it is currently April and MTHS is set to 13 then guests can book up to the end of April the next year.

The default is 13 is MTHS is not specified.

In the following screen shot example the current month is April 2014 and MTHS is set to 13.

Once March 2015 is displayed the hyperlink to April (ringed in green) is still available, but the links to May and June (ringed in red) are no longer active. 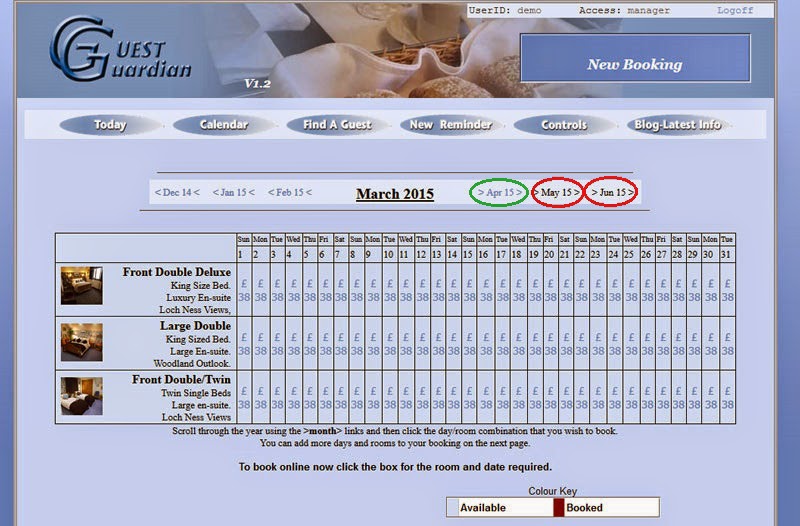